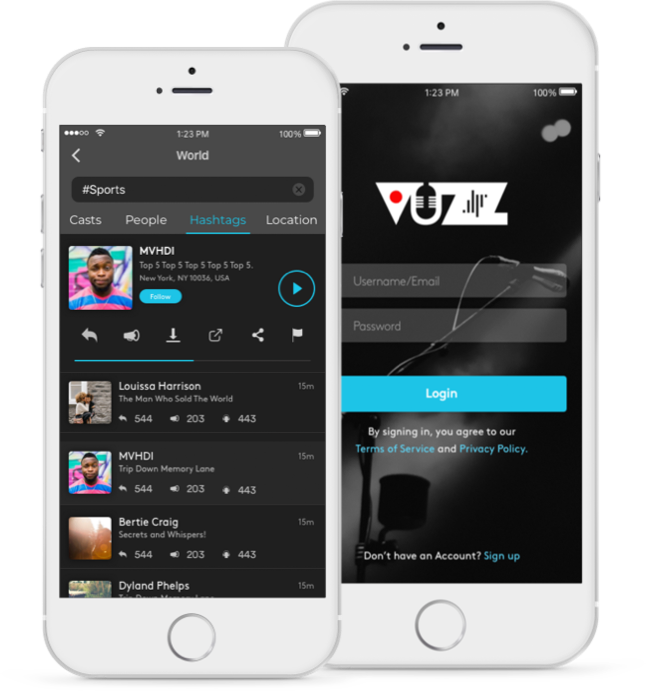 Vuzz is a one of a kind social media app that facilitates people to create, share and listen to broadcasts in an engaging way. The coin of two words - ‘voice’ and ‘buzz’ - Vuzz aims at becoming the ultimate social station created for the people, by the people. Users can listen to news, events, or to broadcasts by topics, hashtags, location (country) etc. When Day One collaborated with Vuzz for native mobile app development services, our goal was to build an app that’s user friendly, engaging, design-centric and performance driven. Built for web, iOS and Android platforms, Vuzz was one of our initial projects for international markets (Middle East).

How the journey
started?

Vuzz was one of the earliest projects we worked on, as early as 2016. In those days, social media apps were buzzing, and we knew right from the beginning that Vuzz had to stand out.

Before approaching Day One for building an iOS and Android app, the Vuzz team had been working on the beta version of the app, which was launched in 2014. However, the app was not powerful or compelling enough. There were plenty of useful feedback received from the beta testing audience, and the plan was to overhaul the entire development phase, right from scratch. The plan was to add new features to the app and release it fresh for a better user experience.

Day One was already making its mark as a top app development company and with projects from across geographies. This was an interesting project to work on considering its scope and uniqueness, and our team was excited to get started with it.

Vuzz was the vision of five siblings who wished to revolutionize the world of social media. And we were happy to be a part of it.

The name Vuzz was conceptualized by merging two words - ‘voice’ and ‘buzz’ - the idea being that the platform will provide users the opportunity to share their voice (thoughts/ideas) in an atmosphere of excitement and activity.

The real Problem and Challenges we faced

It goes without saying that Vuzz came with its own set of challenges. To begin with, when we started work, we realized that the codebase was incomplete. Our team was disappointed but took it up as a challenge. The executive file in .net was missing which meant that our coders would have to start from scratch.

This was one of the turning points for us as a team. We realized that we had to put in more effort than we had signed up for, and our expenses would steep. But, we went ahead with the project. At Day One we believe that we function not just as an app developer but as our client’s technology partner. We had agreed to collaborate with the Vuzz team and sail them through, and no matter the storms, we were not going back on our promise.

The codebase we received was incomplete and even obsolete (.net). For building the native iOS and Android app, out team would have to write the absolute codebase from scratch using the new tech stack.

The idea was to include innovative features like live listening and adaptive streaming. This meant that the tech would have to make room for advanced compression techniques and perform in low bandwidth, without delays or buffering.

Project cost and timeline had to be kept in check. The scope called for high-tech integrations for a smooth user experience. Our goal was to identify affordable solutions that provided value. Also, considering this was rework from 2014, timelines were tight.

Users can exchange voice chats directly with other users/group and enjoy listening to a continuous stream.

Select ‘Trending Channels’ to view what’s trending by country/channels. Users can also view the number of broadcasts and listeners under each channel and sort by broadcasts, listeners or alphabetically.

Based on user preferences and sorting, the top three channels will be highlighted with trophy icons. Users can also directly tune in to any channel from the Trending tab.

The Top 100 users with the highest number of followers/amplifies will be displayed. Users can filter Top 100 by country, followers, Amplifies. The Top 3 users will be highlighted with trophy icons. Users can directly visit user profiles from the Trending section by selecting the user profile picture.

We started on the development and a bit of re-design with three core objectives: improve the user experience, include additional layers of security and enhance performance. We were already facing a strategic disadvantage of missing codebases and time, and to ensure product quality, our approach was to revamp and build from scratch rather than trying to fix loose ends.

Revamp and build a native iOS and Android app

Time is money and with the Finch account users can use a single account for Checkings and Investments (i.e. save and earn)

Redesign UI/UX and focus on increasing user engagement, and retention

The platform uses the best AI tools and technology to offer investment recommendations tailored to individuals. With the option of low cost stocks and bond ETFs it mitigates risk.

To ensure that users have access to cash in their Checkings, the platform allows instant access to funds, even the amount that has been invested

Vuzz has been more than building an app - it has been an experience for the entire team. Mobile app development solutions involves the conceptualization of the entire app development life cycle. With Vuzz, since we were roped in mid way, the challenges started from day one.

At the end of the day, we were happy that we had been able to build an app that lived up to client expectations.

How has the journey been

It’s been an experience working with the Vuzz team!

When we started working on Vuzz it seemed like a fun project. Our experience with building mobile applications helped us in understanding the complexities of the project, and having worked with a global audience base, we understood the requirements of users and clients alike. Today as we scale as an AI services company for custom software, web and mobile applications, we feel humbled and proud to have been Vuzz’s technology partner.

Liked this story? We have
more journeys to share.

Let’s connect to discuss your idea!

Contact Us Not yet ready? Here’s what you can do:

Want to be a part of Day One’s
team? Visit C​areers